The past two weeks were filled with big tech’s annual developer conferences, where companies like Facebook and Google unveiled exciting product announcements and comment on company strategy.

Of note were several announcements related to Virtual and Augmented Reality. We’re breaking down the big announcements at F8 and Google I/O to help marketers understand how to take advantage of new tech. Ultimately, we want to help marketers lead the way in embracing these new technologies and content formats to tell better brand stories.

Facebook announced huge strides in both VR and AR. It established itself as THE device manufacturer of choice for mainstream VR with the launch of Oculus Go and as a serious competitor to Snap’s AR dominance with better AR integration to popular products like Messenger and Instagram.

AR Studio was launched last year as a developer platform to create AR effects like masks and filters, accessed by users through FB’s Camera. Now, creators can share their interactive AR camera effects on Instagram. This gives marketers another (very familiar) platform to distribute branded AR effects–outside of just Snapchat Lenses. This is important for marketers who are investing sums into developing new immersive content experiences: broadening the distribution channels for these experiences helps deliver greater return on that investment.

To deliver even greater reach, distribute branded experiences outside of the walled gardens of Facebook and Snap. See how OmniVirt powers AR web selfies and AR objects on publisher inventory across the web

AR for the Messenger Platform

Having AR capabilities in Messenger takes this direct approach a step further. Now brands don’t have to message with customers solely with text. Brands can now directly share and activate experiences like virtually trying on products, all accessed within Messenger, on a 1:1 engagement. Brand such as Kia and Sephora have already tested this on Facebook:

Oculus Go is for sale!

Heralded as the first standalone VR system, Oculus Go has been met with rave reviews. Experts predict it will lead to an uptick in VR adoption. With a product launch accompanied by over 1,000 VR content experiences, brands can continue their immersive content investments with confidence that VR adoption is growing. 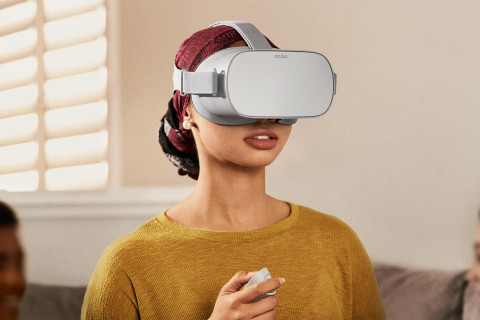 Facebook users can take 3D objects from 3D posts in their News Feed and place into Facebook Camera.

Imagine how this plays out: Universal Pictures posts a 3D post on News Feed containing a Raptor 3D model to publicize Jurassic Park. A user can take and place this branded Raptor 3D model in their natural environment, straight from Universal Pictures’ post. The user plays with thee Raptor on their tabletop and sends pictures of it to their friends, One 3D Post and its assets now has more ways to travel, all prompted by the user’s affinity for the branded 3D model.

The big takeaways? 1) Brands can expect more reach with their 3D assets and should start investing more in this format. 2) Expect users to be more actively engaged and familiar with 3D objects thanks to the ability to use AR functionality outside of just 3D.

See how OmniVirt delivers this exact experience over the web

The most buzzy news out of I/O this year was an AI-enabled assistant that can book appointments for you over the phone. But, Google also made exciting 360° and AR announcement that are all about increasing access and adoption to immersive experiences.

Tech giants appear to be embracing the “camera as a platform” idea. Google goes in on the action with Google Lens, which uses a phone’s backwards-facing camera to scan and identify objects. Once objects are detected, Google will display information in a digital overlay (hello AR!). Some of this information includes suggested actions, such as bringing up florist shops near you if a bouquet is scanned, or suggested shops/clothing items if a piece of clothing is scanned.

Expect user behavior to normalize around accessing digital information on top of the real world, making AR content a new standard for experiencing and understanding the environment around you. Brands should invest in AR to be part of this new content standard.

ARCore (Google’s development platform for augmented reality) now has a feature that allows developers to attach digital images to real-world objects. Imagine viewing product packaging and seeing a branded experience attached to the packaging through your phone. Instead of asking users to scan a QR code, Augmented Images builds the same “unlocking” experience without any ‘scan’ needed.

Note this is only available ARCore-enabled Android devices.

Brands benefit here again by the ease of which users can access this branded AR content (QR codes contribute to a drop-off in adoption, just as downloading an app does). Build in immersive experiences through AR that delight customers–product packaging just became a brand’s new canvas!

Tour Creator: encouraging the 360° format for all

Geared towards educators and students (awesome!), Tour Creators “enables students, teachers, and anyone with a story to tell, to make a VR tour using imagery from Google Street View or their own 360 photos”. This move democratizes 360° content creation ever further. Marketers should expect an even greater embrace of the 360° format (and take advantage of interactive hotspots while they’re at it).